You are here: Home » Blog » Jewish Heritage » Starting a Chain Reaction of Giving

Starting a Chain Reaction of Giving

Recently the Township of Hillsborough honored one of our congregants, Dr. Laurene Wolf, after she was named one of “New Jersey’s Favorite Kids’ Doctors” by NewJerseyFamily.com for the second year in a row. In awarding Laurene the proclamation for her many achievements and service, Mayor Carl Suraci declared, “We are proud to call Dr. Laurene Wolf a Hillsborough resident and thank her for her many contributions and dedication to our community.” 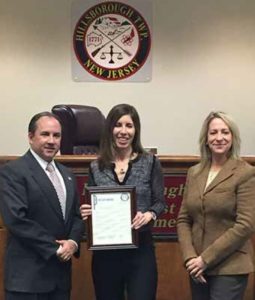 Laurene established her orthodontics practice in Hillsborough in 1998, where she treats children, adolescents and adults with dedication, care and stateof-the-art technology. In fact, you may already know her as your child’s orthodontist, or as a fellow Temple Beth-El congregant, along with her husband, Howard, and their children, Carly and Reese.

But what you may not know is how much Laurene also gives back to her community. For example, her Giving Smiles Foundation for several years sponsored an essay contest that asked children, including those at Temple Beth-El, to write about the community service they were involved with. “The idea behind the contest was that it would hopefully encourage kids to do more acts of charity and community service and that it would also reward the kids who were giving back to our community,” explains Laurene. An independent committee selected the three winners, who had donations made in their honor to a charity of their choice, and the first-place winner also received complimentary orthodontic care.

In addition to the Giving Smiles Foundation, Laurene also works with Steps Together, a Hillsborough charitable organization formed in 2013 to inspire township residents to support other local families facing medical crises. Through working with Steps Together, Laurene has met some of the families who are beneficiaries and personally witnessed the ups and downs of battling the daunting diseases and medical conditions they face. This has underscored to her the value of strong community bonds and the importance of caring for one another. “It’s eyeopening how the outpouring of community support lifts these families up and helps them with their struggles as much as the financial support does,” she observes.

On the education front, Laurene also awards a monetary scholarship to a graduating high school senior who wants to enter the dental field and who has been involved in community service. “It’s a way to give back to my profession and again reward and hopefully encourage further community service,” Laurene explains. For instance, “one of the past scholarship winners was planning to become a dentist and also was interested in joining the Peace Corps,” she notes.

Laurene credits her strong Jewish background and her parents’ example for her active involvement in good works. “My Jewish values are at the core of who I am. I was always brought up to be charitable and help others. I remember my mother often saying it was a mitzvah to welcome anyone to our home who didn’t have a place to go at the holidays. I also saw my parents donating monetarily to various charitable organizations, and my family was very involved with charity through volunteering with our temple in East Brunswick.” Looking ahead to her next mitzvah, Laurene says, “Only time will tell what is next! I keep an open mind, and I love to get involved in things that start a chain reaction of giving and inspire others to also get involved.”

Congratulations to Laurene on her honor from Hillsborough Township, and thank you for all your dedication and public service!