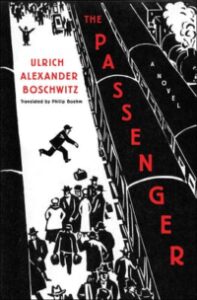 The book tells the story of Otto Silbermann, a respected German-Jewish business owner living in Berlin who, with his wife, have to flee their home in the immediate aftermath of the Kristallnacht pogrom of November 1938 as Nazi German soldiers pound on their door in the middle of the night. Silbermann and his wife escape from his business through the back door and travel on several trains within Germany in an attempt to flee the country.

The Jewish Book Council wrote that “The Passenger offers an intimate portrait of Jewish life in prewar Nazi Germany at the onset of dehumanization, before the yellow star was imposed.”

The book, written by Boschwitz in the weeks after Kristallnacht, was initially released in Germany in the same year. It was released in the United States and the United Kingdom in 1939 and 1940, respectively. Its first German title was Der Reisende. The Passenger was originally published in English in the United States as The Man Who Took Trains in 1939, and in the UK as The Fugitive in 1940. Boschwitz died in 1942 when the boat he was travelling on, MV Abosso, was torpedoed by the Germans. The book failed to make an impact during its original release and was out of print shortly thereafter.

The book was re-discovered in the 2010s when Boschwitz’s niece contacted the German editor Peter Graff regarding the novel. The original typescript of the book was re-discovered in 2016 in the archive of the National Library in Frankfurt. It was revised and edited by Graff using specific instructions Boschwitz had provided in letters to his mother.

The revised edition was released in 2021. This edition was met with widespread critical acclaim and positive reviews. It was translated into more than 20 languages within a year of its release. In 2021 it entered The Sunday Times’s list of Top 10 hardback fiction bestsellers, more than 80 years after it was originally published.