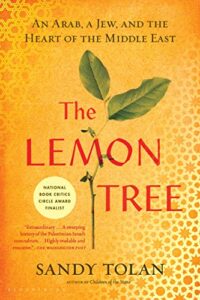 In honor of Israel’s 75th birthday, join us in reading “The Lemon Tree” by Sandy Tolan, a story of the Israeli-Palestinian conflict at its most human level.

“The Lemon Tree” tells the story of a forming friendship between Bashir Al-Khayri, a Palestinian twenty-five year old, and Dalia Ashkenazi Landau, a nineteen year old Israeli college student. Their friendship begins when Bashir travels to Israel with the goal of seeing his old stone house, with the lemon tree behind it, that he and his family had fled 19 years earlier. Upon finding it he is met by Dalia, whose family fled Europe for Israel following the Holocaust. They develop a surprising friendship that gets tested over the next thirty five years as political tensions ran high, and Israelis and Palestinians each asserted their own right to live on this land.

Based on his extensive research and reporting, Sandy Tolan tells the deeply personal story of two people seeking hope, reconciliation, and home.

Join us in the TBE library for a book discussion. Marian Zeldin will be the facilitator. RSVP to Debbie Herman.