You are here: Home » Engage » Upcoming Events » Immigration in America Today: Danger on the Southern Border?

Immigration in America Today: Danger on the Southern Border? 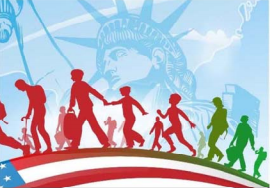 Temple Beth-El and the Reform Jewish Voice of New Jersey are teaming up with the Network for Responsible Public Policy (NRPP) to present a discussion of immigration in America today.

This event is free and open to the community. Register at www.nrpp.org

John A. Gronbeck-Tedesco is Associate Professor and Convener of American Studies at Ramapo College of New Jersey. He is the author of the book, Cuba, the United States, and Cultures of the Transnational Left, 1930-1975 (Cambridge University Press, 2015) and co-editor of Screening Images of American Masculinity in the Age of Postfeminism (Lexington Books, 2015). His writing has appeared in American Quarterly, Journal of Latin American Studies, Washington Post, and several other web publications. He is currently working on a book about Cuban refugees.

Hanna Siegel is the Managing Director of New American Economy (NAE), a bipartisan coalition of business, civic, and cultural leaders in all 50 states dedicated to making a case for smart, sensible immigration reform. Before her time at NAE, Hanna worked as an Associate Producer for ABC News, working on the Domestic News Desk, World News, and in the Investigative Unit. She has a Master’s degree in Public Policy from the Harvard Kennedy School of Government and a Bachelor of Arts from Duke University. She currently lives in Brooklyn and is originally from Rochester, New York.