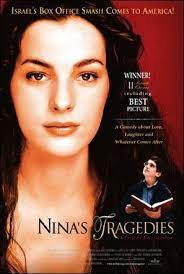 Our next entry in our Jewish Film Discussion Series is “Nina’s Tragedies.” This film won the Best Film award from the Israeli Film Academy along with ten other awards. The film is sponsored by Sisterhood, and Simona Rivkin will lead the discussion.

Teenaged boy Nadav is secretly in love with his beautiful Aunt Nina. When her husband dies and his parents get divorced, Nadav is more than willing to go live with her. However, many strange things start to happen just after he arrives. Nadav’s estranged father Haimon/Alex suddenly wants to reconnect with him after many years. Also, the mourning Nina is pursued by a photographer named Avinoam. The film is shown from the perspective of Nadav and tells of his experiences regarding his aunt Nina and her loss, understanding love and confronting death in his family. The film is directed by Savi Gabizon.

The plan is to show the film on Zoom followed by a discussion.

RSVP to Bob Krovetz for the Zoom link.