You are here: Home » Blog » Israel » The Results Are In: World Zionist Congress Elections

The Results Are In: World Zionist Congress Elections

From January 21 through March 11, 2020, Temple Beth-El and our Reform Movement campaigned in the World Zionist Congress Election. This was the one democratic opportunity we had to have our Reform voices heard in Israel and throughout the world, and to work to implement the values we hold dear — pluralism, equality, freedom, and ensuring the future of Israel as a Jewish and democratic state.

Rabbi Gluck and I are incredibly grateful to all of our core team volunteers, our leadership and to all who voted. We are also grateful to the Reform Movement, partner organizations and affiliates. We are pleased to report that more than 31,000 Reform Jews took the time and money to raise their voices, be counted, and make an impact in support of our movement.

In this year’s election, Vote Reform/ARZA/Vote Reform and Reconstructionist Movement garnered 31,500 votes. Coming in first place, we remained the largest Zionist organization in the United States and should not be taken for granted. Here are some more points to put this into perspective: 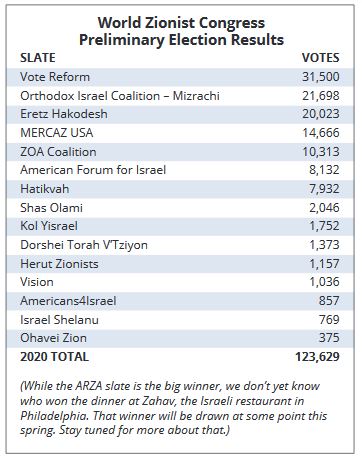 This year, the grassroots campaign began with a Reform Movement-wide campaign, including our own. Our congregation was one of hundreds of that participated in encouraging every Reform Jew to cast a vote for the ARZA slate. It is because of our efforts as a community that our movement was able to make waves across the country and the globe.

“A large representation for Reform Judaism at the World Zionist Congress will give us the power to promote religious freedom, pluralism and equality for all Jews, including personal status issues such as marriage, divorce, and conversion; equal access to holy places like the Kotel; and more. It will result in increased funding for Reform Judaism in Israel and the Diaspora. And it will also increase our representation in the World Zionist Organization and the Jewish National Fund (JNF), which allocates money for land purchases throughout Israel. Increasing the strength of our voice in these Jewish national institutions will enable us to make them more reflective of our Reform Jewish values.”

It is with deep gratitude that we thank all those who worked tirelessly for our congregation in this campaign. You all displayed an unbelievable effort to get out the vote. We must build on our success and continue to support Reform values in Israel in the coming years.