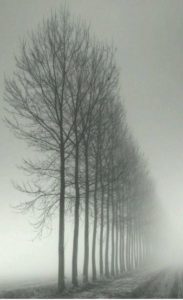 I have never felt a connection to the Holocaust. To me, it was always a horrific crime against humanity and never a terrible act against my own people. But on a recent trip to the concentration camps of the past, where I saw the ashes for myself, it has never felt more real. Being in Poland and staring history in the eye was powerful. I have come to realize the Holocaust is my own history, and my thoughts have completely changed. Learning about the Shoah was a personal masa (journey) I didn’t think I needed. It opened my eyes to see the terror these people must have faced. It is hard to imagine what the realities of more than 6 million Jews were. How can I imagine being moved to a ghetto or crammed into a train car? It was nearly impossible for me to think about any of this prior to going to Poland. David Solomon was right; it is a pilgrimage everyone should take at least once.

In Poland, I recognized the balance that was laid out in front of us: life and death, both unanswered questions. Poland helped me put into perspective their drastic differences. We visited many places that emphasized life before the Holocaust or death during the Holocaust. One place that really settled with me was the town of Tykocin. First I complained about my exhaustion from being unable to sleep on the plane ride there, but as we danced in the town synagogue I felt lively. Before we got up to dance someone had said that we should bring Jewish life back to the synagogue, which resonated with me. My peers and I had the opportunity to sing and dance loudly in a place that was once silenced by Nazis. We cheered and prayed, the synagogue booming with life, until suddenly we stopped. I turned around to see that it was quiet.

David Solomon had stopped us and said that were leaving and that we must do the next things in complete silence. It was an abrupt conclusion, but we fulfilled the request and became silent. We walked to the bus and then had a short bus ride to the next place we would be going. We walked off the bus; we were in a secluded area surrounded by trees. We found our Jewish history teachers and walked into the forest, where we would learn about the mass graves that awaited just a few steps further. When we approached the gated areas, my body reacted before my thoughts even could. A knot formed in my throat and tears spilled from my eyes. I have never felt this in my life. I don’t know what emotion it was but it was overwhelming and all I wanted to do was sit and stare at the mourning trees around me.

I have experienced death before but I have never been face to face with the history of a catastrophe. My heart was broken for the families, the innocent, the dreamers, the people who had no idea this would be their last chapter. We learned of the final words they spoke before their deaths. The victims of Tykocin were murdered after being forced to sing “Hatikvah” (“the hope”). We sang Hatikvah together and never have I ever wanted to hold onto my classmates more than in that moment. I genuinely wanted to hold them. We, as Jewish teenagers living in Israel, are the hope these victims had. The lyrics of Hatikvah speak about the importance of Jewish spirit and an appreciation for Zion. Without these things our hope for freedom in our own land would be lost. We, together, are living embodiments of the Hatikvah.

Although death was constant in the Shoah, so was life. There were many people who saved lives during this tragedy. One of the most important values of Jews is life. The Torah says to “choose life.” Jews in the Holocaust tried to stay alive as long as they could even if it meant risking their lives even more. Before this trip I knew very little about the actions the Jews did against the Nazis (also known as Iberleben). I learned of the statue to praise Hitler and the Third Reich that had Jews’ ashes embedded into it so when the Jews were forced to make homage to it they were in actuality praising their fallen brothers; I learned of the workers in Birkenau who destroyed an entire gas chamber at their own expense; I learned of Irena Sendler, a Polish woman who took it upon herself to save 2,500 Jewish children from the ghetto. From having never heard of any stories of uprising or defiance to suddenly hearing a multitude of them was shocking. I was so proud to know that the Jews did not just let this happen. They fought for themselves and others fought for them, too. Learning of these stories changed my entire outlook on the Shoah. It is easy for these stories to go unnoticed but we mustn’t let that happen. These people should be remembered for their acts of bravery. They saved lives.

Rabbi Emil Fackenheim wrote: “Jews are forbidden to hand Hitler posthumous victories, they are commanded to survive as Jews, lest the Jewish People perish.” This can be interpreted in the sense that Jews did not survive to this day only to die off later from a lack of numbers. Jews must continue to live and thrive. I am reminded of the speaker we had recently, Rena Quint, who said, “I hope my mothers are looking down on me proudly and I hope Hitler is looking up seeing me talk to another generation of Jews.”

I plan to continue the Jewish people’s legacy and I vow not to forget the acts against my people. Elie Wiesel said, “Let us remember, let us remember the heroes of Warsaw, the martyrs of Treblinka, the children of Auschwitz. They fought alone, they lived alone, but they did not die alone, for something in all of us died with them.” I want to remember the people who played major roles as heroes. I don’t want my people’s death to be for nothing, I must continue the path they paved for me. In many ways, I have already observed Fackenheim’s mitzvah. I will not let go of Israel and the impact it has on me as a Jew. I want to continue my Jewish learning throughout my life. I want to raise my future kids as proud Jews as well who will know not to forget. Never again.

As we traveled through Poland I struggled with the ongoing thought of contrast. As we sat in the concentration/death camps I couldn’t help but notice the striking contrast of beauty and murder. I have never been more disgusted to say this, but some parts of the camps were genuinely serene. Sitting in Birkenau, I noticed the serenity of the forests. Being tucked away into the forest was peaceful. The trees were green and offered soft rustlings of the leaves. How haunting is it that a place of such destruction and murder could also be so pleasant that I wanted to sit and read my book? These trees, both beautiful and daunting, a parallel to the trees we saw from the Lopuchowo forest. Again, as I sat reflecting about the mass graves in front of me, I couldn’t help but think of the trees. The trees saw all these people die and the last thing these people saw was these trees. But now I stood in front of them, in front of the graves too, as a young Jew, very much alive. And once again, I thought to myself what a peaceful place this would be if it weren’t for the horrors I can’t even start to imagine. These tranquil places are poisoned by humans killing their brothers and sisters.

Editor’s note: Talia Rubin is attending URJ Heller High. Located in the beautiful Judean hills outside of Jerusalem, Heller High is a high-school experience in Israel and includes field trips all around Israel, and a week-long pilgrimage to Poland. Three TBE teens are attending Heller High this spring: Talia Hirsch, Talia Rubin and Lindsey Skole. They are set to return in late May. We look forward to hearing more about their experiences.

This article was originally published in the May-June 2019 Shofar. An archive of Shofar issues can be found here.