Every movement has a flashpoint that helps create a new generation of activists.

Count TBE’s Erica Milgram, 18, and Mitchell Friedman, 17, among the young people across New Jersey and the country who say  they will no longer stay silent on issues impacting their generation and the world.

Both say they were called to action after the February 14 fatal shootings at Marjory Stoneman Douglas High School in Parkland, Fla.,  and wanted to make their voices heard on an important issue. 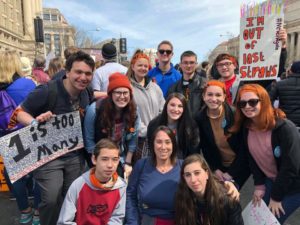 TBE Teens and Lisa Friedman at the March for Our Lives, March 24.

Erica and Mitchell in March were among a number of students who got on a bus outside TBE on March 23 that took them to Washington, D.C. to join many others from across the country at the March for Our Lives to protest gun violence. Similar marches were held the same day in major cities across the world.

Advocating on the issue was personal for Mitchell, who is friends with a student who was at Stoneman Douglas the day of the shooting. Mitchell said he went to Washington to show support for his friend.

But Mitchell’s support of his friend did not stop with the march. He knows that having an opinion on important topics, and advocating accordingly, is critical.

“I think every individual voice matters,” said Mitchell, who lives in Hillsborough and plans to study either political science or pre-law in college. “Every person has an opinion, and every person wants their voice to be heard.”

Those are the kinds of values Mitchell said he was raised with – to ask questions, to make his voice heard, and to do those things for which he has strong beliefs.

Erica, 18, of Somerset, has long been interested in helping people, but decided to begin her advocacy journey with the TBE bus ride to Washington.

“This type of advocacy is important because nothing will change if we don’t start somewhere,” Erica said. “I believe that the start to change is just beginning, and showing up at marches all over the world proves that we truly want and need something to be done.” 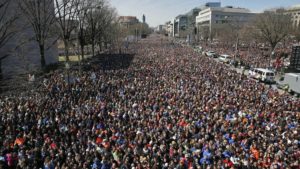 Advocating on behalf of others is a staple of Jewish education at TBE, both for students and adults. In February, TBE’s 10th grade confirmation class traveled to Washington for an educational leadership program known as the L’Taken Seminar for Social Justice. The program engages youth on issues ranging from economic justice to abortion, gun-violence prevention and other civil and human rights issues. Students who participated in the L’Taken seminar were able to meet with members of the New Jersey congressional delegation at the U.S. Capitol to lobby on important issues, visit historic sites in Washington, and celebrate their Jewish heritage through other activities.

TBE also has a vigorous Social Action Committee that focuses on matters of social justice to help people in need, regardless of faith. The committee works regularly on issues addressing religious action, the environment and Jewish ethics.

Those kinds of issues and others speak to Erica, who plans to study social work and health sciences this fall at North Carolina’s Elon University. Ultimately, she said, she would like to have a positive impact on the world while working in Israel, where she has already spent a semester abroad.

“If adults can see that we have strong opinions and want to do something about issues, then hopefully a better future will come of it,” Erica said. “It is so critical that youth my age speak up. If enough of us speak up, then maybe we’ll be heard.”