You are here: Home » Blog » Gratitude » Making Strides for Religious Understanding in the Holy Land

Making Strides for Religious Understanding in the Holy Land

Pastor Todd Buurstra, religious leader of the North Branch Reformed Church, and I have been making strides together for some time now. Some have been in the area of advocacy, where we have been strident in our call for justice and compassion for the weak and vulnerable among us: the stranger, our neighbors who are immigrants, and especially the Dreamers, the young people brought to our country as children by parents who are undocumented sojourners in the U.S.

Along with Dr. Ali Chaudry of the Islamic Center of Basking Ridge, we began to take steps together to stand against hate, bringing together a community of communities comprising nine different religions for a prayer vigil in April 2017 at Temple Beth-El. That coalition came together again in October at North Branch Reformed Church to stand for environmental responsibility.

Recently, the three of us — Pastor Todd, Dr. Ali, and I — were blessed to make pilgrimage to the Holy Land, to walk in the footsteps of the forebears of our three faiths, to bear witness to the truths that each of us holds dear, and to reflect on the greater truth of the One God that unites us all. 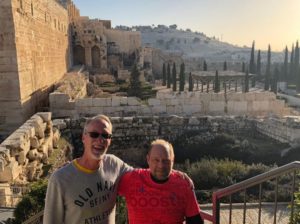 Rabbi Arnie and Pastor Todd pause for a breathtaking view during a run around the perimeter of the Old City of Jerusalem.

Pastor Todd and I shared our journey with the CCAR Interfaith Clergy Mission to Israel, which included six rabbis, six Christian clergy, and one imam. Dr. Ali joined with Rabbi Marc Klein on an Interfaith Clergy Mission with the Jewish Federation in the Heart of NJ. Though these two missions were organized under different auspices, their itineraries were so similar that it is possible to speak of them as if we shared the same experience. (See Pastor Todd’s remarks below.)

Upon reflection, Pastor Todd, Dr. Ali, and I were able to divide the most powerful aspects of our journey into three categories: witnessing faith, witnessing hope, and witnessing modern Israel, Jews, Arabs, and Palestinians.

On Sunday, March 11, at 4:00 p.m., our three congregations will come together as Pastor Todd, Dr. Ali, and I share reflections on our journey, engage in dialogue with our communities, and all break bread together. Here is a preview of the kind of insights I look forward to sharing.

I have visited the holy places of other faiths before, but I must confess that such encounters were primarily of academic or historical interest. This time, the experience was remarkably different. Standing side by side with Christian and Muslim friends, for whom these sites were part of their living-faith narrative, made them come alive with emotion and drama. We were witnessing each other’s faiths as we listened to the stories of events that happened in each place and saw them through each other’s eyes.

We spoke openly and soulfully about what these events and places mean to us, how they have shaped us, and also of our struggles to reconcile the contradictions inherent in religious symbolism. I noted the discomfort of my Christian colleagues as they watched coreligionists kissing the burial slab of Jesus. And they saw my distress at how the Western Wall has become a place of exclusion, division, and even violence against those who don’t hew to ultra-Orthodox interpretations. The more we learned and engaged in heartfelt dialogue, the more we returned to the same mantra to describe what we were observing, intoning like a chorus the words, “It’s complicated!” But amidst all the complexity, there was the deep emotion of witnessing each other’s faith that touched our souls. Among the differences we saw an illuminating similarity shining through, and that was the shared experience of God’s presence in the world and in our lives.

News reports from Israel and the Middle East depict a bleak reality of bitter conflict and discord. Rarely do the media offer reason for optimism. But there is much more to the picture than hatred and violent struggle. There is also cooperation, coexistence, understanding, and even loving fellowship between Jews and Arabs, as well as Christians, Jews, and Muslims. It may not make the headlines, but it is there to be seen, and it is cause for hope.

One shining example is the work of an organization called Roots, which was founded by former extremists Rabbi Hannan Schlesinger and Ali Abu Awad. Hannan is a West Bank settler who once believed that the entire Land of Israel was given by God to the Jewish people. He had never met a Palestinian face to face. In fact, he says they were invisible to him. Then, one day, he had a transformational encounter with a Palestinian neighbor that compelled him to understand and embrace the truth that there is another people, the Palestinians, who have a legitimate claim to the same land and a right to their own sovereign state.

We met Hannan along with a young Palestinian man from Bethlehem named Noor Awad. Noor and his family have experienced great hardship under Israeli occupation, and many of his friends have embraced the path of militant resistance. But Noor, too, was moved by a human encounter with his neighbors, Jewish settlers whom he has embraced as partners in the pursuit of peace and reconciliation. At this stage, Roots is promoting dialogue and human understanding, but they realize that this is a precursor to the quest for a political solution that will involve two states that share one homeland.

From afar, the Middle East takes on a mythic quality. It seems more like a seething cauldron of powerful forces that threatens to overflow and scorch the earth than the actual pastoral landscape of hills and valleys, verdant vineyards, bustling cities, and diverse people living colorful lives day by day. The land of the Bible, the place where Jesus lived and taught and the site of Muhammad’s rise to heaven, is also a thriving modern country inhabited by Jews, Christians, and Muslims. It is not just a place of dreams deferred, but also one of dreams fulfilled, though certainly more so for the Jewish people than the Palestinians. But here, too, lies a source of hope. Israel is a model of a people dispersed and despised returning home to build a nation where they can be self-reliant.

That quest has come at a cost. Security is a constant challenge, as we saw when we visited the northern border, where threats loom large from Hizbollah and ISIS in Syria and Lebanon. Standing on the Golan Heights, it was clear to all why Israel had to take control of the hills from which Syrian artillery rained down on Jewish communities in the valley below from 1948 to 1967.

Similarly, one cannot fully understand what Israel means to the Jewish people unless one goes to Yad Vashem, the Holocaust memorial in Jerusalem. It brings home with the most painful clarity why the Jewish people believe in the necessity of a sovereign Jewish state. One of the most meaningful moments of our journey was the tearful embrace of a Christian colleague that conveyed to me the depth of that understanding.

Yes, Israel is a complicated reality. Yes, there is so much more to do to realize the promise of peace and dignity for all the people who are destined to share that holy land. But we, three faith leaders from Central New Jersey on a pilgrimage to the roots of our respective faiths, discovered the greater truth of all our faiths, forged on that sacred soil — that we are all children of the One God, sisters and brothers who must learn to love one another and share the gifts that God has given us.

Bright Lights in the Land of Promise

First, let me thank you, Temple Beth-El, and Rabbi Arnie for making it possible to share this trip through CCAR and Da’at. It was a very great blessing. Adding to the fun of a run around the Old City was the rich religious dialogue. Poor Arnie had to put up with my longer legs and constant questions, which he ably answered while we huffed and puffed. I have learned so much, and feel full and blessed.

In Israel, I saw both bright signs of peace and dark shadows of conflict.

The dark shadows of conflict included security checkpoints and fences that divided Jewish from Arab neighborhoods. While they may be necessary, they are evidence of the firm divide. And although I recognize the issue of settlements is complicated beyond what I understand, growing settlements seem to make a two-state solution even more complicated to negotiate. And lastly, I learned much about the futility of the Palestinian leadership that never misses a chance to miss an opportunity, and serves more as a dictatorship than a just representative of its people.

But not all is dark as the sun rises. The lunch at our Muslim host’s house in Shfaram nourished not only our bodies but our souls, as our host shared how he is leading his community towards accepting “the other,” as evidenced by his warm hospitality. And then there was Rabbi Noa Sattath’s presentation of the work of the Israel Religious Action Center (IRAC) at the Reform Seminary, Hebrew Union College in Jerusalem. I was encouraged by how the Reform movement is a leader in justice and peace initiatives in Israel, and how your congregation is donating generously, that the Israeli Reform movement might grow. And while I could add more, the joint presentation between Rabbi Hannan Schlesinger and Palestinian Noor A’wad regarding befriending the enemy, as part of the Roots/Shorashim Project, was nothing short of a bright light. While they acknowledged the many rejections they receive, the growing acceptance was heartening.

I come back home with a much deeper commitment to “pray for the peace of Jerusalem” (Psalm 122:6), and I hope to take more members of my congregation to Israel one day, so that we can more fully enter into what God has done, and is doing, in this land of promise.

Originally published in the March-April issue of the Shofar. For more, visit the Shofar archives.