You are here: Home » Blog » Holidays » The Origins and Meaning of the Tu BiShvat Seder

The Origins and Meaning of the Tu BiShvat Seder

There is no halachah, no legal structure to define Tu Bishvat. For this reason, its position in Jewish practice wavers between two opposing poles, which can be understood by reference to two important Jewish leaders of the 20th Century: the modern orthodox scholar Rabbi Irving Greenberg and the last Lubavitcher Rebbe, Rabbi Menachem Schneerson.

According to Greenberg, Tu Bishvat is a minor festival which never achieved even the currency of Rosh Hodesh because there is no trace of the festival in the Bible. In the absence of historical significance, it should only be considered a minor semi-festival. For some, this is reason enough to overlook the holiday. On the other hand, Schneerson says that because Tu Bishvat is a minhag (custom), not a mitzvah (commandment), one’s celebration of it can only give God greater delight (than the observation of commanded holy days). In other words, Tu Bishvat is special precisely because its observance is not required. In this way, one can truly give the offering of one’s heart. This prioritizing of contemplative versus compulsory practice is very much in tune with some of the best aspects of contemporary spirituality. Let us consider the development of the Tu Bishvat seder.

The first reference in Jewish history to Tu Bishvat is in the Mishnah, Rosh Hashanah 1:1, which is the first mention of a New Year for the trees. This set a date for the mitzvah of tithing one’s land as described in Leviticus 27:30: In addition, there were two other mitzvot connected: that of orlah (giving young trees a chance to grow), and first fruits as mentioned in Leviticus 19:23-25.

While the Temple existed, Tu Bishvat was just a date to regulate the tithes. The tithed fruit was eaten by priests, Levites, their households, and the poor. Tithes signified the welfare of the priests and Levites, the upkeep of the Temple, and the prosperity of Jerusalem. Following the fall of the Second Temple and the Diaspora, all the way up to the 16th Century, Tu Bishvat disappeared and there was almost no mention of it, although some piyutim from Gaonic times found in the Genizah ask God for a year of blessing for the trees to be recited during the Amidah. But the connection diminished as the Jews had no land to grow fruit on and no Temple to bring it to. During this time, the symbol of the tree replaced the importance of the actual tree in Jewish life. The torah became the “Etz Chaim,” the source of spiritual nourishment.

Tu Bishvat eventually revived. It became a focus for the dispersed people’s attachment to the Land of Israel, and a way to express gratitude to God. The Temple and the altar were replaced by the seder table. It became a day for celebrating trees and fruits, and for praising and thanking God. So the hidden beginning of nature’s yearly renewal became a day of spiritual renewal for Jews. This was not without precedent, because the Rabbis had always learned religious lessons from the natural world.  However, there is no evidence of specific Tu Bishvat observance until the late 16th Century custom of eating fruits on Tu Bishvat by the Kabbalists in Tzvat. By the end of the 17th Century, they had created a Tu Bishvat seder: a special festive meal of fruits joined to the recitation of scriptural selections and invested with symbolic and mystic meanings.

In the Kabbalistic book on the holidays, Hemdat Yamim (Choicest of Days), the seder is described, as well as 30 kinds of fruit, including the seven associated in the Torah with the Land of Israel (Deuteronomy 8:7-8), and four cups of wine. Verses dealing with fruit and trees from the Torah, rabbinic literature, and the Zohar were recited. This custom of the Tu Bishvat seder originated with the Ashkenazi Kabbalists in Israel and was later abandoned by the Ashkenazim but adopted by Sephardim both in Israel and in surrounding countries. The chapter in Hemdat Yamim describing Tu Bishvat eventually became a book by itself, Pri Aitz Hadar (Fruit from a Fine Tree). This was then used as the text for the traditional Kabbalistic Tu Bishvat seder, which was called a “tikkun,” like “tikkun lail Shavuot,” rather than a “haggadah,” as for Pesach. This is because the Tu Bishvat seder is not a “telling” but a “repair.” The Kabbalists of Tzfat made a few tikkuns. They wanted to make a spiritual repair in the cosmos, the life of the Jewish nation, and the individual soul.

The Kabbalists compared the eating of the fruit at the seder with the fruit eaten by Adam and Eve in the Garden of Eden. The purpose of the Tu Bishvat seder is to repair all of one’s eating and repair the sin of Adam and Eve, who ate the fruit of the wrong tree. Thus, symbolism of a return to Eden pervades.

During the seder, two kinds of wine are used. The white represents Tu B’Av, and the weakening of the sun’s rays. The red is for Tu Bishvat, signifying new flowering and the victory of spring over winter. Thirteen biblical passages about the produce of God, fruits and plants are read. There are also readings from the Talmud (mostly Zeraim) and the Zohar. The seven fruits of Israel, as mentioned in the Tanach, are featured: wheat, barley, grapes, figs, pomegranate, olives dipped in olive oil, and honey dates, as well as new fruits not yet tasted during the season. It also includes and etrog, apple, walnut, carob and almond. Special efforts are made to obtain rare fruits.

To understand the meaning of the seder, it is necessary to explain some of the mystic theory behind it. The central tenet of Judaism is that God is one. The mystics believed that nothing is separate from God: there is God separate from the world and God within the world. What people call “God” is only part of God. The purpose of Kabbalah is to show that it is all only one.  Accordingly, “YHVH” symbolizes God’s oneness, whereas “Elohim” represents God as manifest in the multiplicity of nature. The Baal Shem Tov said that God is everything, and everything is God, in the same way that the shell of the snail is its home and also part of itself. The Gematria for “hateva” (nature) and “Elohim” (God) both equal 86. The mystics used this as a basis for seeing divinity in nature and the belief that the spiritual reality behind the world and the world itself are both one and divine, with God beyond both. Everything in this world is a symbol of a parallel reality in the higher world. According to mystic tradition, when the word of God descended from heaven, it split in two parts: the Torah and the natural world. Therefore, there is divine wisdom in everything. 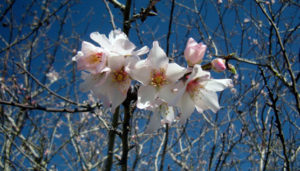 Tu Bishvat is a time for renewal in nature, and thus also for renewal of the soul. The trees are judged, and it can be regarded as a second Rosh Hashanah for Jews to repent and also to create new insights into Torah. A central belief behind the Tu Bishvat seder is that human actions affect the cosmos and nature. God makes people responsible for creation and seemingly small actions may have great effects and repercussions. On Tu Bishvat, the actions of eating fruit in holiness with blessings and kavanah, praying for trees to thrive, is thought to affect the trees’ future growth and their production of fruit. For this reason, eating fruit is celebrated at the seder as the purest form of eating: nothing has to be killed. Even a vegetable is part of the plant  itself, but fruit is a product of the plant whose consumption does not harm the plant in any way.

It celebrates meditative eating, and tikkun/repair for Adam and Eve having eaten from the forbidden tree. Tu Bishvat directs thoughts both to the Garden of Eden and to Israel. When farmers brought first fruits, it was with a recitation of gratitude to God for giving the land to the Jews. It reminds Jews of the return to Israel now, and the ultimate redemption: the return to the Garden of Eden, and the redemption of the world. At that point, the revelation of Godliness in all nature would be seen, and then everyone would be a prophet and a mystic with direct experience of God. The Torah metaphor for bliss and closeness to God is an orchard. According to Torah, fruit is the natural food of man.

On Saturday, February 3, we will celebrate Tu Bishvat at TBE at noon following Shabbat services. We will experience mindful eating and the blessing of the many fruits and nuts of the Tu Bishvat seder in a lofty attempt to rain down blessings upon ourselves and the earth. In this way, we can also hope to strengthen our connection to the bounty that sustains us, and our resolve to recognize and retain our role as stewards to the natural world. I hope you’ll join us!

Originally published in the January-February 2018 Shofar. For more issues of the Shofar, visit the Shofar archives.