You are here: Home » Blog » Interfaith » “My House Shall Be Called a House of Prayer for All Peoples” (Isaiah 56:7)

“My House Shall Be Called a House of Prayer for All Peoples” (Isaiah 56:7)

What do these religious groups have in common?

In addition to the fact that they undoubtedly share certain spiritual values, they all gather for worship, study, and fellowship at Temple Beth-El.

For the leadership and staff of TBE, and we hope for you as members of our community, it is a source of pride that so many religious groups share our spiritual home. Welcoming others to experience the warmth of fellowship that we enjoy when we come to TBE is a tangible expression of the value of hospitality. And it is important to us as Jews and Americans to support diverse expressions of religious faith.

Welcoming other faith groups to share our home is also an important ideological statement. We Reform Jews are pluralists. We do not believe that any one group or person has a monopoly on truth. We treasure our Jewish faith narratives and our identity as part of Am Yisrael, the Jewish people, because they are our truths, not because we believe that they are the only truths.

The prophet Isaiah had a marvelous vision of unity that would come to pass at the end of days, when all the families of the earth join as one and make pilgrimage to Jerusalem. On that day, the house of God that had served as the religious center of the people Israel would become a house of prayer for all. “I will bring them to My sacred mount and let them rejoice in My house of prayer…for My House shall be called a house of prayer for all peoples.”

Isaiah’s vision doesn’t involve all the peoples becoming Jewish. As the prophet Micah said, “All the peoples shall walk, each in the name of their God…” (Micah 4:5). Rather, says Isaiah, we will all come together in Jerusalem as one human family to acknowledge the universal truth of God, who transcends all our differences and makes us one.

As Jews, we see it as our mission to bear witness to this universal truth by the way we worship, through the sacred texts we study, by the language and concepts we employ, and through acts of kindness and justice. And when our Muslim, Christian, Hindu, Buddhist, Jain, Bahai, and other sisters and brothers of faith do the same essential things in accordance with their traditions, we Reform Jews believe they are fulfilling the mission to which they hear themselves called by God.

In late April, a broad coalition of faith communities came together at TBE under the banner of “Standing Against Hate” and declared that “Hate Has No Home Here” in our community. We also made a pledge to “Stand Up for the Other” when others are targets of words and acts of hate. We offered prayers for unity and peace in the languages of seven different faith traditions, and, in so doing, in our own day, in our own small way, we made real Isaiah’s vision that God’s house shall be a house of prayer for all peoples. 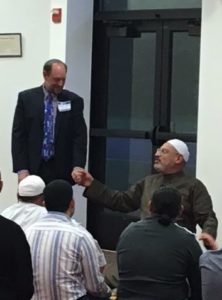 Rabbi Gluck and Imam Chebli at an interfaith program, May 11.

Hosting other faith communities in our sacred space has fostered connections that otherwise might not have been made. For example, in May, we welcomed the members of the Muslim Center of Somerset County to share an evening of dialogue and fellowship. We were graced with the presence of Imam Hamad Chebli of the Islamic Society of Central Jersey, who warmly shared with us his insights into the life and faith of the Muslim community. We broke bread together, sharing both halal and kosher treats, and had a wonderful, joyful encounter that felt like a family reunion.

On April 23, the Sai Baba community invited me to speak on the meaning of life according to the teachings of Judaism. This led to an extremely warm and fruitful exchange that we hope to build upon. In this new year, we look forward to deepening and expanding these relationships. On October 29 at 2:00 p.m., at the North Branch Reformed Church in Bridgewater, we will, God willing, assemble an even greater spectrum of faith communities and civic leaders under the banner of “Many Faiths, One Earth.” We will declare our shared commitment to be faithful stewards of the one home that God has given to us all. We will join in song and prayer, learn each other’s teachings on environmental responsibility, and commit to and engage in actions to care for God’s creation.

At a time when some seek to fracture the human family through verbal and physical acts of violence, it is vitally important that we draw more closely together and denounce every effort to divide us by race, religion, gender, sexual orientation, or nationality. The variety of faith groups that meet at TBE and our gatherings as a diverse but united faith community teach us that Isaiah’s and Micah’s visions are not a fantasy, and that we need not — indeed, must not — wait until the end of days to heal the brokenness in our world.

May the New Year 5778 be one of renewed hope and promise for the fulfillment of our dreams, and may it be one in which we advance the visions of our prophets by words and deeds of loving kindness.

L’shanah tovah tikateivu v’teichateimu, May you be written and sealed for a year of blessing!

Originally published in the September-October 2017 issue of the Shofar. For more, visit the Shofar archives.