Our teens have had two terrific travel experiences over the past few months. In December, our 10th grade confirmation class went to Washington, D.C. for the L’Taken Seminar for Social Justice with the Religious Action Center of Reform Judaism.

Finding inspiration at the Martin Luther King Memorial in Washington, D.C. as part of L’Taken.

L’Taken is an educational leadership program that exposes students to a variety of issues, such as economic justice, abortion, refugee resettlement, immigration and other civil and human rights. In addition to learning sessions, Shabbat celebration, visiting the United States Holocaust Museum and free time to explore and socialize, the program culminates with a day on Capitol Hill, where our students meet with the offices of both senators and representatives to lobby on an issue of importance to each of them.

Here are thoughts from our students, which illustrates why we call this trip a highlight of the 10th grade year:

“The Confirmation trip to Washington, D.C. not only brought me closer to my classmates but also taught me about important issues that are affecting the Jewish community. My favorite part of the trip was definitely the last day, when we went to Capitol Hill and spoke to our congressmen and senator. I also really enjoyed meeting other teenage Jews from around the country. I still keep in touch with some of the people I met. Another favorite part was going to the Holocaust Museum. I had been to the one in Israel before but never this museum, and I found it incredibly moving and interesting. In the end, I absolutely loved the trip and would definitely do it again if I had the chance!” — Abby Wilson

“L’Taken was one of the greatest experiences of my life. It was awesome getting to meet new people and to become closer with my own classmates. It was exciting to walk through our nation’s capital and present our speeches. It is definitely something I will remember for the rest of my life!” — Alex Wald

“I liked L’Taken because I learned more than I would learn in an average day of school. Additionally, I made new connections with my classmates.” — Mitchell Friedman 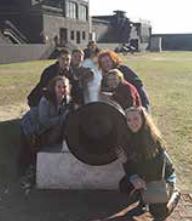 Goofing off and learning lots in Charleston.

In February we took our post-confirmation (11th and 12th grade) students to Charleston, South Carolina, where we explored the rich Jewish and American history of the South. Highlights included touring the Kahal Kadosh Beth Elohim cemetery, where members of the congregation who fought in both the Revolutionary and Civil wars were buried, and joining their Reform community for services on Friday night. We also traveled to Fort Sumter to learn about the history of slavery, secession and the Civil War through the South Carolina perspective, and explored a plantation originally run by slave labor that grew the cash crop of rice (not cotton or tobacco). And, of course, our kids had the opportunity to build lasting relationships with one another.

For many, the greatest highlight of the trip is bonding with their peers.

Members of the post-confirmation class bless themselves at Shabbat dinner.

Some thoughts from the teens who were on the trip:

“The Charleston trip was everything I had hoped it would be. Visiting a place so rich with Jewish history,    that dates all the way back to the Revolutionary War, was incredible. I enjoyed Shabbat services in a temple that is the fourth oldest in the United States. This trip    also helped to strengthen my friendships.” — Kelsey Kaplowitz

“I liked the trip to Charleston because it gave me a glimpse into the history of the Revolutionary and Civil     Wars, insight into the Jewish community in Charleston, and this area of the South in general. The hospitality, food and architecture were all outstanding components of the city, as well.” — Owen Miller

Our Charleston trip was more than amazing. Getting to explore the beautiful city with my best friends was an experience I will never forget. The mix of education, fun and free time brewed the best trip possible.”   — Emily Armant

“I liked the Charleston trip because I was able to room with people I normally don’t talk to, hang out with people I don’t hang out with on a regular basis, get closer with the seniors and peers in my grade and eat some good Southern food.” — Carly Radowitz