You are here: Home » Blog » Community » Honoring Those Who Seek it Least and Deserve it Most: Betty and Arthur Roswell

Honoring Those Who Seek it Least and Deserve it Most: Betty and Arthur Roswell

Who are most honorable? Those who honor others. — Pirkei Avot

There are those who seek honor. From them, says the Talmud, honor runs away. On the other hand, those who do good for the sake of the deed and for the betterment of others are truly worthy of our respect. To honor such people is not an easy thing because they tend to shun such accolades.

This is the wonderful truth about Betty and Arthur Roswell. If it were up to them, every act of goodness and generosity would be anonymous — theirs and everyone else’s. For them, it is the deed that counts. They see themselves as blessed because they can give to others, and because they can, they should. The act is its own reward. 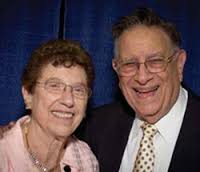 In fact, it is we who have been blessed by the presence of Betty and Arthur in our lives. They are inspiring role models of putting our values into action, and their leadership and generosity have influenced the quality of Jewish life in our community in ways far beyond measure.

I would list the things they have done for us, but I know that this would not please them. So, I won’t! I will say that were it not for Betty and Arthur, Temple Beth-El would be a very different place and its impact would be far less than it is. The same is true of our Reform Movement around the world, and of our local Jewish community.

I am pleased to say that after much cajoling, Betty and Arthur have agreed to allow us to honor them for a lifetime of honoring others, and to do so in a way that reflects the broad scope of their influence on the Jewish world. It will not be a lavish affair. That would not be to their liking. Rather, we will share with them the kind of celebration of Jewish living and learning that they have worked to make possible for so many others.

On Saturday, December 10, at 10:00 a.m., we will hold a Shabbat service during which some of the key leaders of our Reform Movement will teach Torah in honor of Betty and Arthur. They are: Rabbi Rick Jacobs, the President of the Union for Reform Judaism (URJ); Rabbi Dan Freelander, the President of the World Union for Progressive Judaism WUPJ); Rabbi Michael Marmur, the Provost of the Hebrew Union College-Jewish Institute of Religion (HUC-JIR); and Rabbi Gilad Kariv, the President of the Israel Movement for Reform and Progressive Judaism (IMPJ). They are all outstanding leaders of great institutions and powerful and inspiring teachers, and the fact that we will be graced by their presence is in itself indicative of the impact that Betty and Arthur have had on our movement. The service will be followed by a luncheon, during which our guests will pay tribute to Betty and Arthur.

On Sunday, December 11, at 4:00 p.m., we will be joined by Anat Hoffman, the dynamic leader of the Israel Religious Action Center and founder of Women of the Wall. At this event we will also be joined by leaders of our local Jewish community — the Jewish Federation of Somerset, Hunterdon and Warren Counties, the Shimon and Sarah Birnbaum Jewish Community Center, Jewish Family Services, and Rutgers Hillel — who will also pay tribute to Betty and Arthur for their leadership and generosity.

All that remains to make this the extraordinary occasion that it promises to be is for you, the members of our community who have been so blessed by the Roswells, to join in the celebration. As you will see from the details provided in this bulletin and on the invitation you have received, there are a number of ways to participate. Join us for the Shabbat morning service, stay for the luncheon, join us on Sunday afternoon, add words of appreciation to our tribute journal, or all of the above.

Help us honor Betty and Arthur for the innumerable ways that they have honored us.