You are here: Home » Blog » Community » Standing Together at Sinai, Soul to Soul: A profile of Russ and Barb Johnston

Standing Together at Sinai, Soul to Soul: A profile of Russ and Barb Johnston 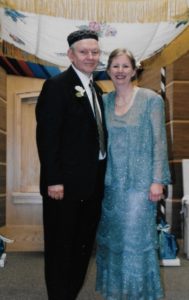 For years, Barbara and Russ Johnston have been a fixture at TBE. They’ve been the friendly faces at the Bagel Cafe, Sisterhood and the temple choir. But what you may not know about the Johnstons is their special love story – not just for each other, but for Temple Beth-El, the community that first brought them together. Here’s how they met and fell head over heels – first for Judaism and then for each other.

Barbara was raised in the Midwest with a strong Protestant background, but, she explains, “I promised my first husband, who was Jewish, that any children we had would be raised as Jews. So I first came to TBE seeking religious education for my son Mark.” But after taking “A Taste of Judaism” and “Introduction to Judaism” classes from Rabbi Arnie, she found herself unexpectedly drawn to Judaism. “I fell in love with Judaism, which was much different than I expected, and converted in 1996,” Barbara recalls.

Russ, for his part, grew up in Illinois. The eldest of three children, he describes himself as having been a moderate Protestant, playing the organ and teaching Sunday school. Like Barbara, Russ first came to TBE with a Jewish spouse. The concepts of “original goodness” in Judaism and tikkun olam, making the world a better place, both resonated with him. He began studying for conversion under Rabbi Gluck in 1997, relaying his story that year during the Reflection Service on Yom Kippur.

Meanwhile, Barbara had begun running a support group for Jews by choice, which Russ joined, and they both traveled with Rabbi Gluck on the congregational trip to Israel in December 1998. Some months later, both divorced by then, the Johnstons started dating, drawn together by their common interest in learning about Judaism and Israel and their love for TBE. Rabbi Gluck married them at TBE in April 2003. The Johnstons invited the whole congregation to the wedding.

“Our tradition teaches that all Jews, past, present and future, stood together at Sinai to receive the Torah, even Jews by choice. Russ and I always say that we must have been standing next to each other at Sinai, even though we didn’t know it for much of our lives – until we both found Judaism and each other at Temple Beth-El. We both credit Rabbi Arnie’s wonderful teaching for making us Jews, and Judaism is the foundation of our marriage and anchor for our lives,” Barbara reflects.

In giving back to Temple Beth-El, the Johnstons have led an active, engaged life of service and volunteer work. Russ has served on the temple board, and sang for many years in the temple choir. “I was always a schlepper,” he laughs. “For 10 years, I kept the cafe supplied with water, cream cheese, coffee and so on. When asked why I never held a higher office, I always said I was more suited to that role. And a congregation needs a lot of schleppers!” As someone who enjoys studying Torah and Hebrew, Russ also supplied the monthly Torah portion for the Shofar for many years. He loves the TBE community “and particularly its hugging spirit,” he emphasizes. Barbara has served on a number of committees; she is also very involved in Sisterhood and is currently Sisterhood treasurer. Both Russ and Barbara helped found the temple cafe in 2002, and still help Jay Taylor when they can. They have gone on several congregational trips to Israel with Rabbi Arnie (six times for Russ). You can see some of Russ’ Israel photos in the kitchen hallway and the Beit Midrash.

The Johnstons have three children and four grand–children. Barbara’s son Mark is married and lives in Jersey City. Russ’ daughter Pam lives in Durham, N.C. with her husband and seven-year-old triplets. Russ’ son Paul lives on Long Island, N.Y. He and his wife have a two-year-old son and a daughter on the way.

Russ strives to stay physically active and mentally challenged in retirement. He meets with a personal trainer twice a week and works on his family genealogy with ancestry.com. Barbara is a reader and crossword puzzle fan.

Since Barbara’s retirement, the Johnstons spend winters in Florida, where they enjoy watching Netflix movies and keeping warm. To tide them over during the winter months, they attend services at Temple Beth El in Boca Raton. “It’s a large congregation, very different from TBE,” Barbara reports, “and it’s not very ‘huggy’, so Russ misses his TBE hugs. Our hearts will always belong to our Temple Beth-El here in Hillsborough.”

We miss you too, Barbara and Russ. See you in the spring!