Every so often, I think about some of the big mysteries of Judaism that have intrigued me since my Hebrew school days long ago.

Did the Red Sea really part, allowing our ancestors to escape 40 years of brutal slavery and an evil dictator? Did Moses hear the voice of God coming from a burning bush? And how is it that Moses’ staff instantly transformed into a serpent?

I’ve listened to the many explanations and interpretations of these mysteries over the years, soaking in the metaphors behind their lessons in order to expand my own knowledge.

And so, it was with this level of interest that I decided to try to understand yet another great mystery of Judaism, one that has confounded our people for decades, yet brought them together as inevitably as if gathering for the High Holy Days.

The very mention of mahjongg sparks smiles and delight among the Jewish women I know. It seems to be as Jewish as, well, matzoh ball soup!

So how did this game become so popular in our community?

Mahjongg was born in China in the 19th century and was the conglomeration of several other games that had been played in ancient societies for hundreds of years, according to a September article at MarthaStewart.com, exploring the positive impacts of mahjongg on mental health.

That article, as well as another at My Jewish Learning.com, indicate that mahjongg’s popularity in the United States exploded during the 1920s, but interest started to wane by the end of that decade as the game became more complex and playing groups developed their own “table rules” that were increasingly convoluted. 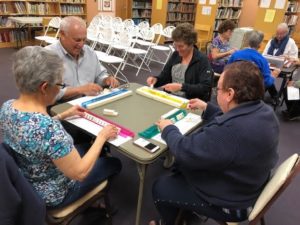 Our loyal mah jongg group enjoying the start of another game.

Enter a group of undeterred Jewish women, who enjoyed the game so much that they would not let it die off, even as its popularity decreased. The women formed the National MahJongg League in 1937 and developed a card that is updated annually to identify winning runs, or patterns, to achieve “mahjongg,” as well as the standard regulations for the game. Unlike a lot of games, however, players must buy a card every year – currently $8 – because the patterns change.

But what is it about Jews and mahjongg? Any number of reasons, according to MyJewishLearning.com:

My own unscientific research has found that mahjongg brings players together in a way I haven’t seen with other games. Mahjongg seems to inspire fellowship. Players eagerly gather for hours at a time, seated around tables, eyeing their bams, birds, craks, dots, soaps, dragons and flowers in covertly developed runs while maintaining Las Vegas-quality poker faces.

Hardcore players are fully fluent in rules that could fill a policy manual.

I decided to find out more, especially after my aunt and a cousin in Maryland clapped with glee one weekend last year when I casually mentioned I might be interested in learning the game. Within seconds, I was being introduced to my aunt’s friends as a new player who could be a “fourth” during visits from Jersey. No matter that I had never even played the game.

The next thing I knew, my cousin and her friends rustled up a game at their temple and had me sit and watch, ostensibly to learn. After 10 minutes, I was having flashbacks to the nightmare that was ninth-grade geometry, when absolutely nothing made sense except, perhaps, the spellings of isosceles and Pythagoras. Watching mahjongg frustrated me. Too many rules to remember and follow, with no discernible logic to them.“Yeah, next,” I thought.

Months later, I still couldn’t let go of what in tarnation was so enticing about mahjongg.

Then, a friend took pity on me and said if I was serious about learning the game, she would teach me, but I’d have to buy a card first. I ordered one from the national organization and eagerly awaited its arrival in the mail.

For my lesson, my friend dumped a set of 144 mahjongg tiles out on a table and made me organize them by suit. We played a modified game, and I started to develop a rudimentary understanding of it. To me, mahjongg is similar in concept to Rummikub, a game I played frequently with my grandmother when I was a teenager and young adult.

I found myself intrigued by the strategy as we played. The same fire-in-the-belly that I get from a competitive game of Scrabble, Monopoly, Boggle or any other strategy-focused board game had the synapses in my brain firing full blast.

After my lesson, I decided to check out TBE’s weekly mahjongg game, held Thursdays at 7:00 p.m. in the library and open to all TBE and Sisterhood members, regardless of experience level. Those in attendance were focused on their own tiles as we played, yet patient as I made mistakes, and kind in their instructions to me.

I’ve been warned, however, that some players in general can be cutthroat in how they play, and certain mahjongg rule violations can, ahem, “inflame passionate debate.”

I haven’t caused any such conflagration. Yet.

My fellow players have been gracious and helpful as I learn with each game. I am enjoying meeting other members of our TBE community, kibitzing with them, having a fun couple of hours away from the daily grinds of work and life, and feeding the strategy craving I apparently enjoy more than I realized.

The socializing, the debate, the intensity, the schmooze…who could resist? These are core cultural aspects of being Jewish. No wonder so many play the game. Of course, it could also be the sweetness I experienced one October night when I was finally able to figure out the patterns on my card and keep a straight face among the veterans at my table, long enough to throw my arms up in the air and yell, “MahJongg!”