You are here: Home » Blog » Leadership » Mark & Cindy Andrews to be honored by Brotherhood

Mark & Cindy Andrews to be honored by Brotherhood 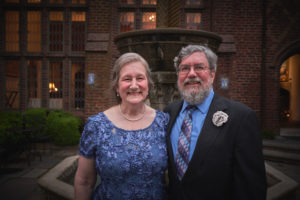 On Sunday, March 24, the Brotherhood will honor Cindy and Mark Andrews with this year’s Person of Honor Award. Brotherhood established the annual award to recognize a Temple Beth-El member or members for his/her dedication to the temple community, their commitment to Judaism to the greater Jewish community, and their acts of tikunolam (“repairing the world”).

The Andrews have been members of Temple Beth-El for more than 20 years. Both have made considerable contributions to our temple and the larger community in many areas.

Mark and Cindy met in high school in 1972. Seven years later they “finally” started dating, as Cindy quips. They married in 1983 and have raised three children: David, 30; Stacy, 29; and Michael, 27. They moved from Long Valley to Bridgewater in 1997 and joined our congregation the following year. As Hillel said, “All the rest is commentary.”

Mark has served Temple Beth-El in many capacities. These include eight years singing beautifully in the baritone section of our choir; volunteering for 4-H fundraising for many years; and staffing and helping to construct the TBE 4-H food booth. Using his professional skills in construction (15 years) and architecture (25 years), Mark has always been available to help build (or repair) numerous items for our congregation, both in and outside our building. Mark was head of the Interiors Sub-committee, integrally involved with the interior finishing of the school wing and social hall additions to TBE. He has been with the Beer Architectural Group for 22 years. Mark’s other interests are his involvement with a high school championship-caliber robotics team for 16 years and playing harmonica with a basement band.

Cindy served on TBE’s board of trustees for 13 years and has served our community in a variety of leadership positions. She has led the Religious School Committee; served on the executive board; and served two years as the congregation’s president. She also has been involved with Sisterhood, serving as treasurer and president. Recently she co-led the constitutional review committee, which revised our temple’s constitution and was approved by our congregation. Cindy also is a regular IHN volunteer, helping in various capacities.

Professionally, Cindy has worked in various industries in accounting and bookkeeping departments and was a teacher in the Bridgewater elementary school system. She was involved in the PTO and was a “band parent” during her children’s school years. Cindy also finds time for some fun extracurricular activities, including being a part of the local Hadassah book club and playing mahjongg.

Together Mark and Cindy love to kayak, hike, go to music festivals and enjoy beer, wine and distillery tours. They will have plenty of time soon to pursue those interests and more, when they relocate to Monterey, Mass., near Great Barrington. They are designing, building and moving to their dream home in the Berkshires very soon and welcome everyone to visit them.

Brotherhood invites everyone to come out to honor Cindy and Mark and to thank them for their service, both to TBE and the local community.

The Person of Honor Breakfast supports the Brotherhood Youth Scholarship Fund. This fund was established to provide all TBE member families’ children the opportunity to attend meaningful educational, cultural and social programs that will deepen their connection to their Jewish heritage.